Sunamp and other storage devices

Hi,
What do you think about the Sunamp systems?
Has anyone got one with a combi boiler?
Your’s
John

@zapaman had a sunamp pre-heating a combi before he switched to heat pump i think … now he has 2!

Yeah that’s correct I have 2 Sunamp units. The 1st one is an iPV unit (ie runs off an MyEnergi Eddi for PV diversion and also the option of off-peak boost over-night during winter / now automated).
This unit was initially used to pre-heat HW feeding into a combi-boiler. This worked perfectly satisfactorily.
But then we wanted to fully electrify our heating so we installed an ASHP in April last year. The ASHP feeds a 2nd Sunamp at 56C for the HW cycle.
So the final set up is Sunamp iPV pre-heating hot water which then flows through (in series) the 2nd ashp connected Sunamp to provide the balance of the HW storage. All in all it works and provides a compact solution.

Hi Zapaman,
Thanks for your imformation i am not at your point of use yet,but may go down the sunamp route
John

Interesting comments. I’ve looked at Sunamp but not got far, primarily because I contacted Sunamp with some product questions and they told me to ask an installer. I’ve got a combi, which is in garage and the bathroom is at other end of the bungalow, so a run of nearly 80’ of pipe for hot water. My thinking was divert with Eddi (I’m a Zappi user) and put the Sunamp right over the shower (in roof space). It would then be a 30’ pipe run back to the kitchen (near the garage). Who on earth designed this building!

Hope you insulate the pipe work

They are wrapped in insulation and under 200mm of loft insulation we added in summer 2021.

You wouldn’t use one for a combi. A direct water cylinder is better in every way. Sunamp is for a completely different setup.

You wouldn’t use one for a combi.

When used only to soak up spare PV at possibly low amounts it is suitable as a pre-heater and if it should reach usable temperature then the boiler shouldn’t ignite. In both cases saving gas and thereby gas emissions.

The Sunamp can also be charged during off peak to provide (a contribution to) hot water and/or heating and a further reduction in gas use.

There is no sensible reason why you’d use one for a gas boiler. With PV and an air sourced heat pump, I’m much more sympathetic.

The problem with combi boilers is that they cannot provide the power output or responsiveness of a direct hot water cylinder.

The limited power output requires using only one shower at a time, which needs a set of valves and a controller to manage which one gets priority etc. Or to be grossly oversized for 99% of typical loads.

Gas boilers also need to operate at two different temperatures, one for domestic hot water, one for central heating, to be maximally efficient.

Combi boilers struggle to do this well. They end up being less efficient and much higher maintenance as a result.

Sunamp uses paraffin to store heat, which has a phase change at low temperatures to provide a higher volumetric storage capacity than water (about double) at a low temperature delta.

The problem with all paraffin based PCMs is that they’re very bad at heat exchange due to the low thermal conductivity of the storage medium. Which is exactly what is required with a combi boiler. So it just does not make sense.

Water on the other hand, is fantastically well suited. Just put in a 150L water tank and convert your heating system to an S plan with hot water priority. Some boilers are terrible and won’t allow setting separate flow rates and temperatures to deliver the highest efficiencies. But we can’t keep using them anyway, so there’s little point going into how best to use gas.

Our Sunamp iPV (with PV obviously) as pre-heat worked superbly when we had the Combi. The Sunamp was handling 95% of our hot water from April to Sept months and about 5% during the least sunny months of Dec to Jan. Our Sunamp iPV has a mixer valve on the output limiting the flow temp to 45C; still plenty hot enough for all our HW uses.
During the very sunniest weeks of the year we simply turned off the combi bolier completely and let the Sunamp handle 100% of the DHW duties.
The flow rate from the Sunamp is at mains water pressure that there is no loss of pressure when someone is using hot water tap at the same time as someone else having a shower.
NB I am not referring to using the Sunamp to store heat FROM a gas boiler, but rather the opposite to avoid using gas altogether (or as much as possible).
Cylinders are cheaper and it you don’t need the space saving feature of the Sunamp then more often than not a cylinder will be the natural choice.

Sorry. I think I’ve misunderstood. I’m assuming it’s only for a combi with no PV.

Even then, I would argue that they’re going to play a small role. But it’s a much more interesting debate than using them to replace standard DHW cylinders!

Here are the Sunamp stats since installing our ASHP. I could do a similar set of stats going back to when we had the combi but it would show a similar picture with the Sunamp ASHP P50 being replaced by the Combi. The summary would be that the iPV feature is/was providing ~42% of our our total DHW direct from the solar PV.
NB all of these figures are in kWh-thermal, the COP on the ASHP during the hot water cycle is ~2.0 so the elec input on the Sunamp ASHP P50 device is ~0.5x times the kWh-thermal quote here.

Sunamp certainly can be used as an alternative to a standard cylinder in many circumstance.
But I am not suggesting here that a Sunamp would be used to swap out an existing cylinder that was already working and was well insulated.
You would, however ,use a Sunamp if you needed its particular set of features and benefits: small footprint and low heat loss etc.

Sunamp certainly can be used as an alternative to a standard cylinder in many circumstances.

Cost/kwh of paraffin based TES is too high. It’s rare the volume is so valuable that the better volumetric density compared to sensible heat storage in water is worth it. You’d have to go into high density urban environments to get real estate that is that expensive, but those are where the system would be inadequate to begin with.

I had hoped that salt based TES would be more practical, but they have a bunch of other issues associated with them. I’ll spare you the details.

Fortunately, we have ice when it comes to AC.

Unfortunately a lot of modern homes are designed on the assumption that there will be instant hot water available, whether by Combi boiler or other means. This means that even if space is available for a water cylinder and expansion vessel the internal layout would need redesigning to fit them. This is particularly so for the rabbit hutches currently sold as “trendy apartments” or similar. In such properties some reduced volume solution is an obvious solution, if not the only one. Sunamp and similar products are mainly aimed at that market.
Clearly there are other applications for the technology for those with the initiative to utilise them.

For those curious about what this actually looks like here are a couple of photos showing the Sunamp iPV in our kitchen cupboard. This is the smallest Sunamp size and provides similar hot water storage to a notional 70L cylinder. NB we have a 2nd unit which stores nominally the same as an 80-90L cylinder as well giving us a total of ~150L equivalent cylinder size. This is quite a modest amount of hot water storage but the re-heat time for the ASHP connected Sunamp is ~25mins so we generally have ample quantities of HW at all times (for 3 people). Oh and I also have access to the temperature data inside the Sunamp units thanks to help from @ben at Carbon Coop (see last image for details). 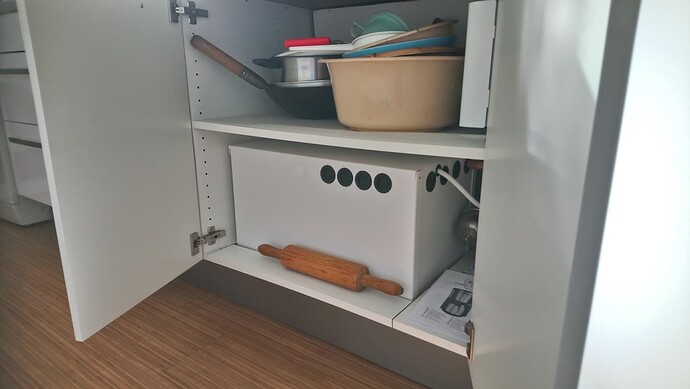 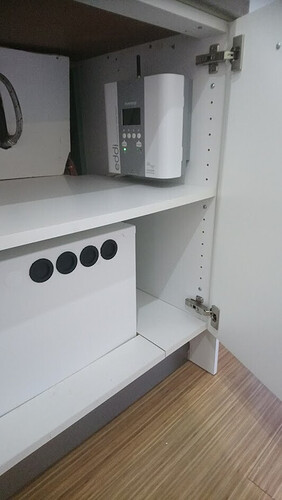 You can clearly see why those without a cylinder, and no practical space for one, could opt for a Sunamp.

I have a cylinder with solar thermal coil but am still interested in getting one for a distant hot water supply instead of “miles” of pipe through the length and height of the house.

I see that the illustrated unit is larger than revealed at first sight. It is sitting on the floor and protruding into the kitchen unit rather than sitting on the bottom shelf. Much as I would like a thinner wider Sunamp, such as might fit entirely under the kitchen units, I understand the practical restrictions on shape.