I borrowed the FLIR thermal imaging camera. I didn’t find anything shocking, but there are a couple of images of my living room that I don’t fully understand. I live in a barn converson. The walls of this part of the house are about 1m thick. They comprise of stone on the outside, a cavity (no insulation) and the internal wall. I attach two sets of photos. The first two were taken today with the outside temp about 9c and no wind. The second two were taken yesterday with the outside temp about 7c and a strong wind. Both sets show the same two external corners. 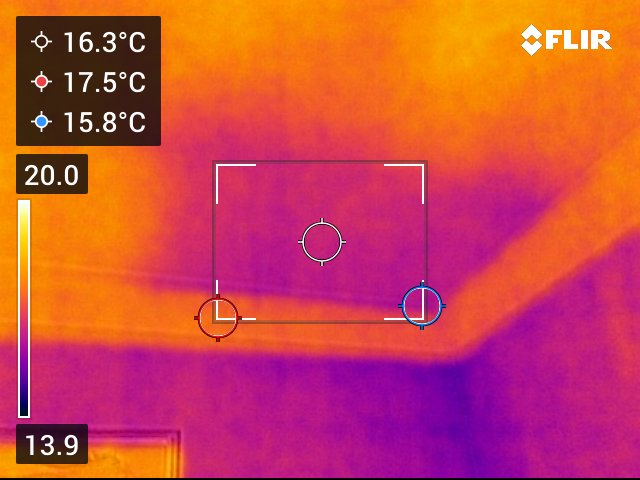 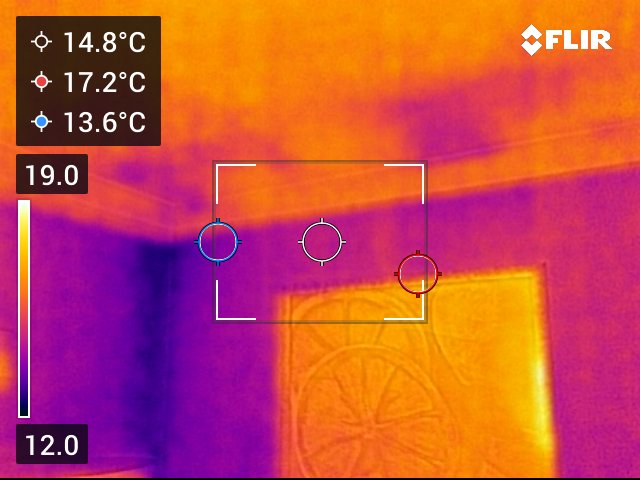 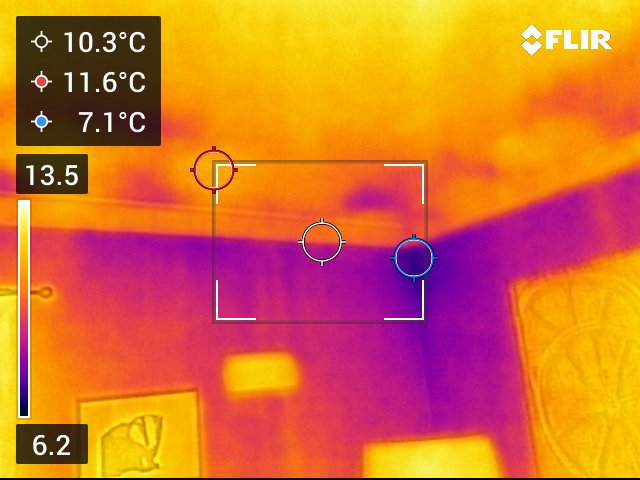 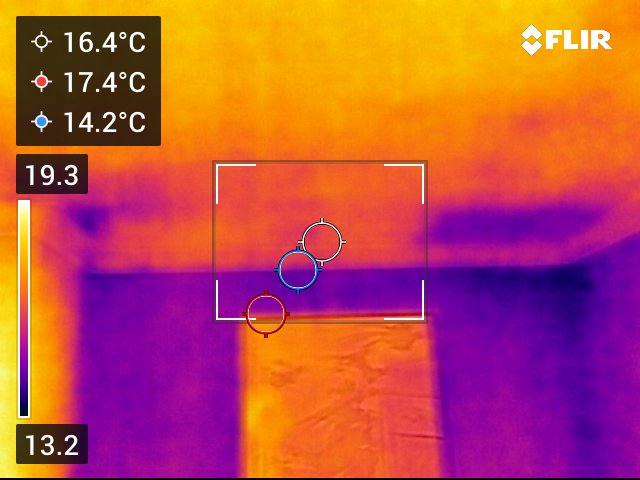 Is there anything to be worried about? I suspect these are fine as the walls are not insulated.

Hi Andy, I am no expert but the low temperature indication would be of concern to me - 6.2C on an internal wall (heated space) is a bit low. Might be worth sticking a moisture probe on it. If you can access the ceiling space it might be worth a-look-see. Knowing how the ceiling is constructed is the first step before interpretation.

Thanks. I thought that, but when I used the camera outside, it was recording temperatures at -2C when it was about 7C yesterday. So, I repeated the tests today and the temperatures on the same walls are double at around 14-16C. I suspect the change is the camera and not the weather. When I find my moisture gauge I will check it, but I am more confident today than yesterday.

However, I was not sure if the patterns of colder areas looked suspicous or not. None of my other external walls/ceilings look like this, but these corners are a little more exposed. That square patch on the right of the last photo looks too square?

That square patch on the right of the last photo looks too square?

Agreed. It definitely needs a nosey around in the loft. Check under the insulation too in case the substrate is different.

Unfortunately there are rooms above and no easy access. The temp difference is not great on the last measurement, but I don’t know what that means.

The IR camera will show up thermal differences - hence the images are real and of concern. Need photos of the external wall as there is a need to understand where the cold is coming from. The shape of the rectangular cold spot is of significant concern- missing or thin insulation or maybe condensation /damp or a localised leak. Where is the central heating pipes/ radiator, drainpipe from bathroom etc?
I attach images from my ceiling when I used an IR camera and I was not happy, so I ripped it off to reveal condensation and mould growth caused by a lack of insulation and pooled surface water on roof .

The external walls are about a meter thick with the outside portion stone from the original barn. The pictures outside showed no hotspots at all on the walls or roof.

The room in question is downstairs with a room above. I’ll check the patch out with a moisture meter.

I have just finished borrowing the thermal camera. Using it has highlighted to me that the heat from uninsulated heating and hot water pipes is leaking to the outside.

I have already tried putting pipe insulation round some pipes near to the boiler, but there isn’t the space to do that. The pipes are too close to the floor and wall. I was thinking of trying the radiator reflector sheet as an alternative.

Here are some images, some I took at night and also in the morning. 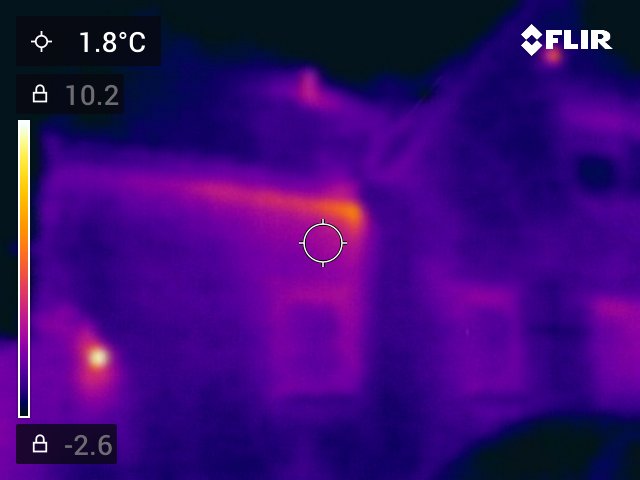 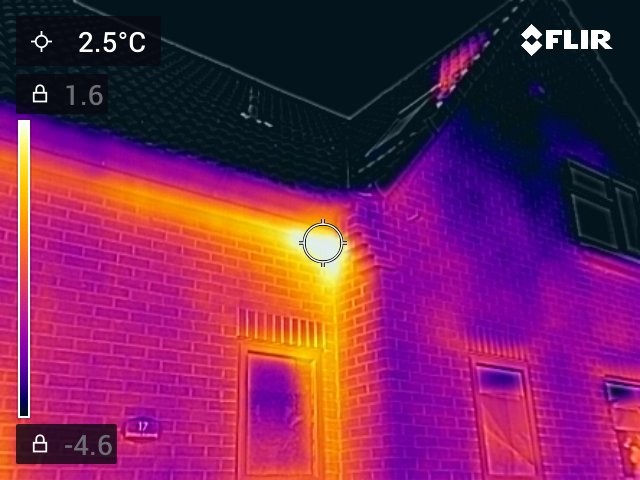 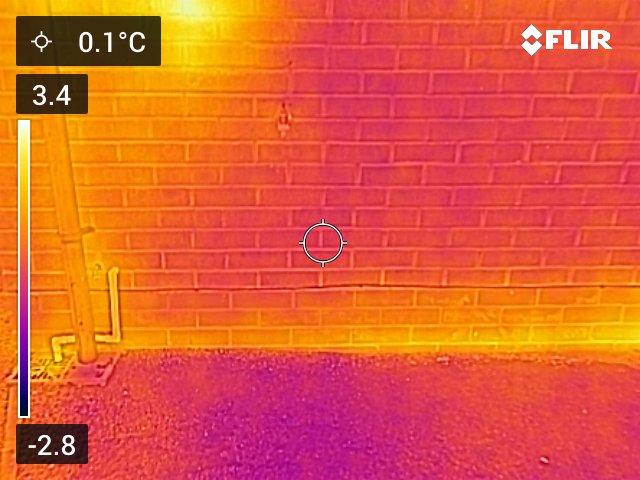 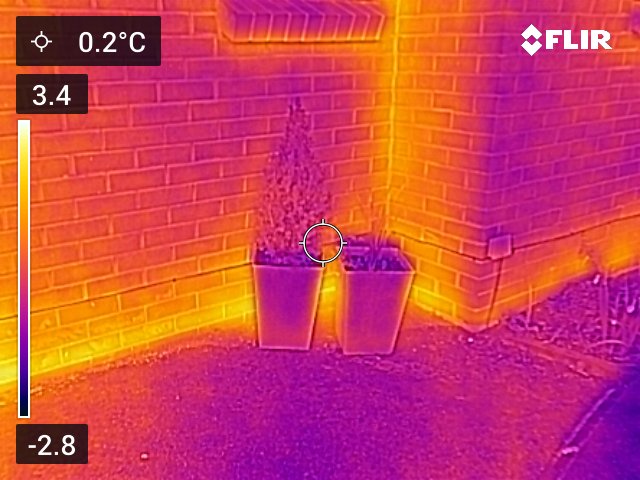 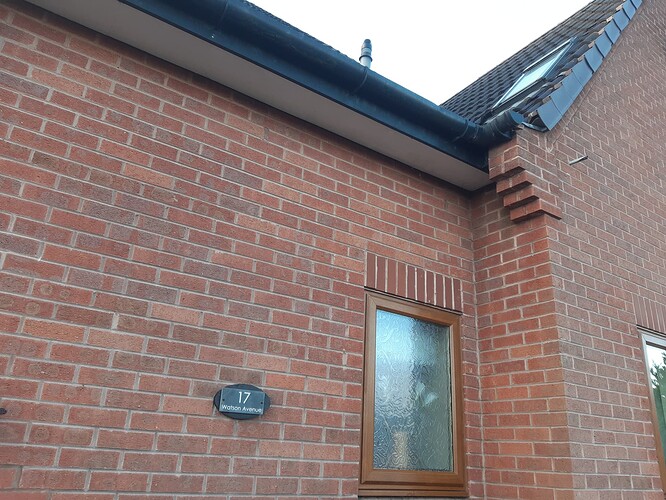 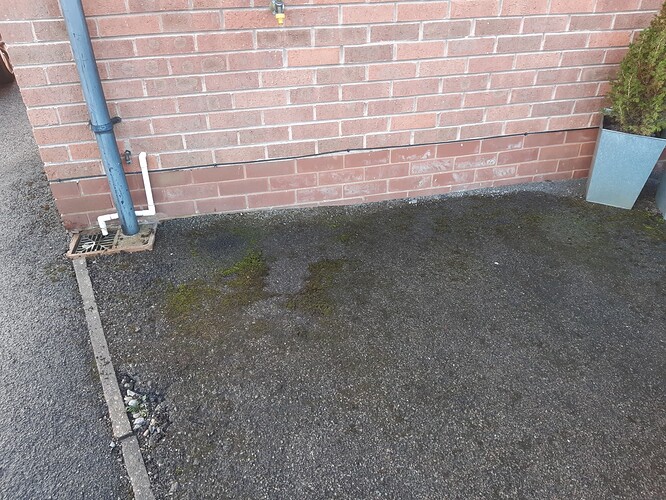 Rather than pipe runs that looks like thermal bridging.

You ought to insulate the pipes anyway. Try making an “L” profile with foil along wall and floor and then filling with spray foam.

The cavity insulation is not continuous between different wall profiles, it doesn’t extend to the ground and stops at ceiling height instead of the top of the wall. Also possible underfloor losses.

The skimping on insulation for all houses built by that builder may have saved them a few £ but the occupiers will have been paying far more over the years.

EDIT: The windows look as though they are well fitted and good quality. They are let down slightly by the frames, which are loosing a little more heat than the glazing (a common problem).