We had new doors fitted and a suggestion was made to flatten the threshold on one door to which we agreed. This has not worked out. The aluminium threshold is a great heat conductor and we get condensation on it in addition to the rubber seal that occasionally shifts in the closed position forming a permanent air vent.
How to insulate the aluminium?

I regret to say that you probably need to change your threshold, both from the insulation and draught proofing perspectives.

How easily can you cut out a groove below the threshold to its full width and to a depth of 150mm or to the DPC, whichever is the lesser?

Then into the new void fix Compacfoam 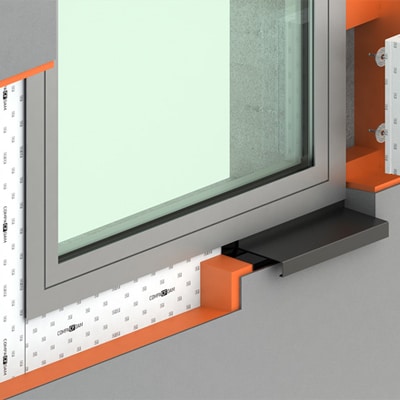 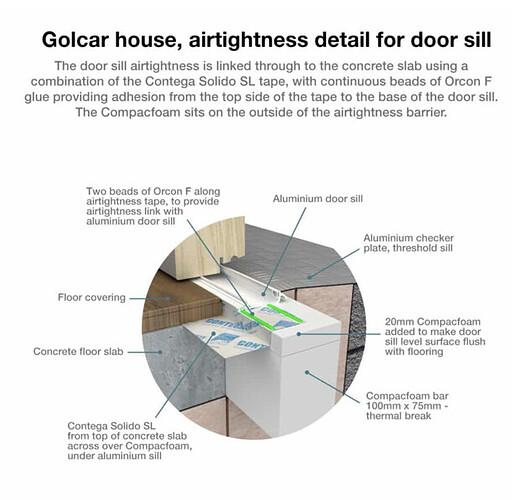 You could start by comparing the thermal and airtightness characteristics of your new door and frame with the advertised details. If, as I suspect, there is a big discrepancy then you could have recourse to the installer/manufacturer.
Over 35 years ago I had an aluminium door set installed that was thermally broken. I would have hoped for some improvements by now not regressions.

I was just about to ask a similar question. Our front door, fitted about 5 years ago, sits on top of the original quarry tiles. While the door works fine we have noticed that the tiles are a thermal bridge and condensation is wetting the carpet.

Does any one have any thoughts on how to address this without having to rip out a very expensive hardwood door.

It should be possible to remove the door from the frame and the frame from the wall unless you have rendered/plastered after it was fitted. You can then address the insulation (as described above) before refixing the frame and making airtight before fixing the door.

Shame you have a problem Lloyd, but thanks for alerting others to a potential problem. My french windows into the garden have been a trip hazard ever since installed, and when I get round to replacing them I’ll be insisting on a level threshold for age-friendly reasons, so the comments and replies are very helpful. 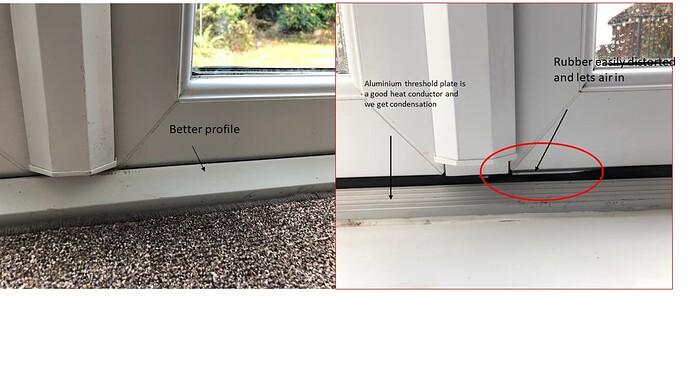 @Tim- I had not thought of going this route but it is a primary option. I was thinking of insulating the threshold but this is not a complete solution. Good proposal

Thanks, it’s good to know that I could help. I haven’t done the same job myself but have plans to move my front door and thus improve my form factor. That process will be part of the job. I do know of other retrofit projects where it has worked.

Btw, in solid walled houses you can also insert thin insulation along the sides of the doorway in a similar way.

With cavity walls it can be worth inspecting the cavity and topping up as required. Push on the insulation batts to see whether they are loose and can fill a gap further along. Due to shoddy workmanship there are often gaps between insulation batts.
Do this when replacing windows too.

Edit: check that you don’t have loose fill insulation before opening the cavity!

Pipes- The standard is copper- should I replace with plastic as this would cause less condensation issues where pipes run under floors and up exposed external walls?

Leave your copper pipes and insulate them with the lowest U value pipe insulation you can find.

New double glazing blunder
Had replacement doors fitted at my Son’s house and it looked ok- happened to work near the door during the windy weather and noticed the draughts. No IR camera but had a review which was probably better. 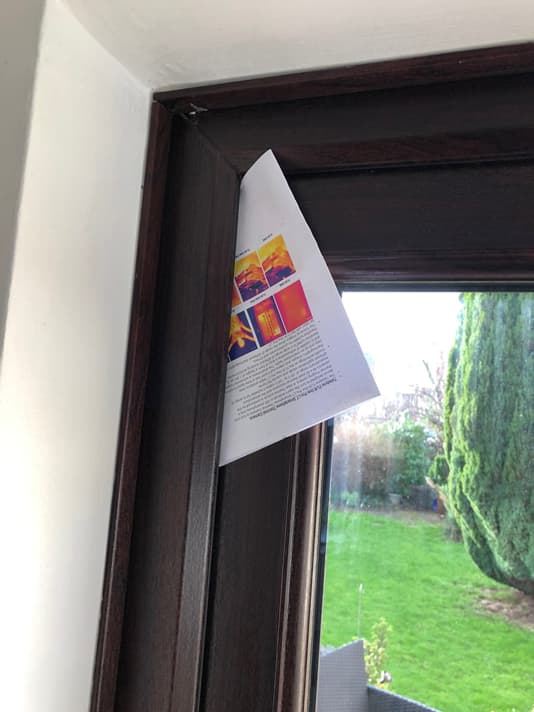 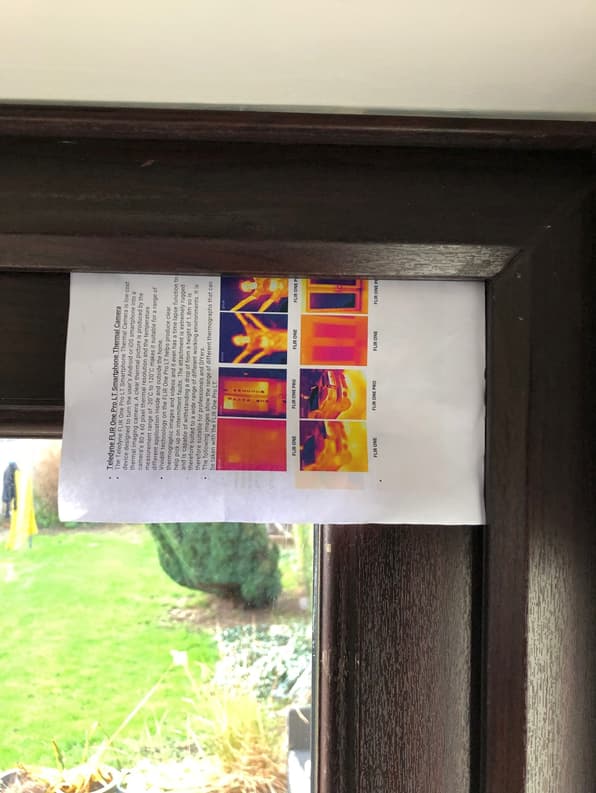 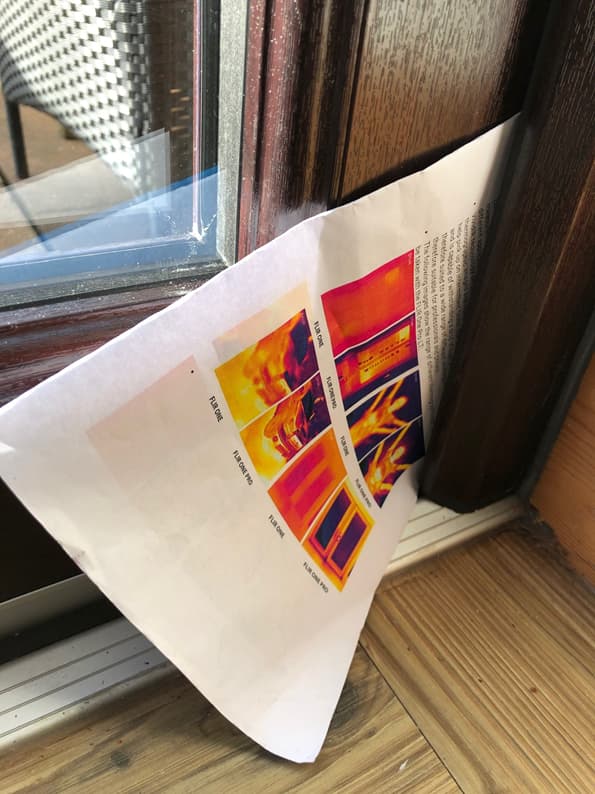 I did ask at the time how they tested the installation was good and didn’t get an answer. Note at some points it took 5 sheets!

That is like my Everest treble glazing. The window might be ok but the fitting is appalling.

What is the trim hiding? I found gaps where I could see right through behind my trims. I had to re-foam and then paint with blowerproof from brickwork to frame to get at least that airtight.

I have requested the fitters to return and do the adjustments to tighten up. During the initial fitting a glass pane had been broken and I was not on site when they returned with the replacement. This paper test is a useful procedure to check installations while fitters are on site and a good check post installation if anything has moved.

Cobwebs-like or dislike?
This cobweb is in my bedroom between the ceiling and the wall. It looks thick and is annoying. How did we miss that during yesterday’s early spring clean and blow out courtesy of storm Malik. The temperature is 18C and the heating is not on, doors and windows closed, yet this cobweb is moving. During renovations I taped the ceiling and wall junction before plastering. There shouldn’t be any air leaks and yet there are the odd cracks at the wall ceiling junction – plastering is a wet process that dried out followed by several coats of paint. As I ponder the movement, I hear the wind from storm Corrie gusting to its own rhythm and yes, the cobweb appears to be in tune with it; stack effect? I thought I had a reasonably airtight home but now I am not so sure. Weather changes also means greater pressure differences. Is this another parameter I need to monitor? And what can I do about this given that the climate is still warming, and the weather is going to be more extreme? All this started with a cobweb.

Cobwebs, or threads tied to light fittings, are a reasonable guide to air movement. Joss sticks are better as they can be moved around while searching for leaks.

Airtightness tests are performed at 5Pa whereas real life can be anything from nothing (very rare) to many times that. If you live in a particularly windy location you will need better airtightness and possibly some windbreaks outside to deflect the worst storms.

This paper test is a useful procedure to check installations

Absolutely. I still have a window where I can fit a small magazine in the gap. Informing the supplier and getting it fixed are proving to be two very different issues. One would hope that the former would automatically trigger the latter but it doesn’t seem so.

So, what’s the point of choosing a supplier who advertises being a member of several organisations (FENSA, Glass & Glazing, etc)?

FENSA, at least, is a supplier organisation and not particularly geared to consumer protection. I tried them and I had to prove that the windows didn’t meat building regulations. As you probably know, building regulations are cr*p, so more or less anything passes.

I started out complaining to Everest, then escalated to their formal complaints procedure and then FENSA, where it stopped.

The Glass and Glazing Federation (GGF) is an industry body promoting best practice, lobbying on their behalf and organises apprenticeships.