Today (24/02/22) I received an email from Carbon Coop inviting me to join the PowerShaper Flex trial. The trial includes fitting of necessary controls.

I had pondered having a HEMS for some time but the thought of having to find and fit the correct kit turned me off the idea. I have registered my interest and wait to find out what happens next. Meanwhile I have created a topic on the assumption that other forum participants will want a platform to discuss the trial (& tribulations?) of PowerShaper Flex. Fingers crossed for a good trial for Carbon Coop and a good experience for the participants.

Someone on another forum pointed out that the PowerShaper Flex web address is an .io one. Being suspicious and suspecting phishing he checked the .io register for powershaper.io. What he found didn’t help his suspicions:

I thought Carbon Coop was more open and reputable than that, and what’s wrong with a .uk web address anyway? 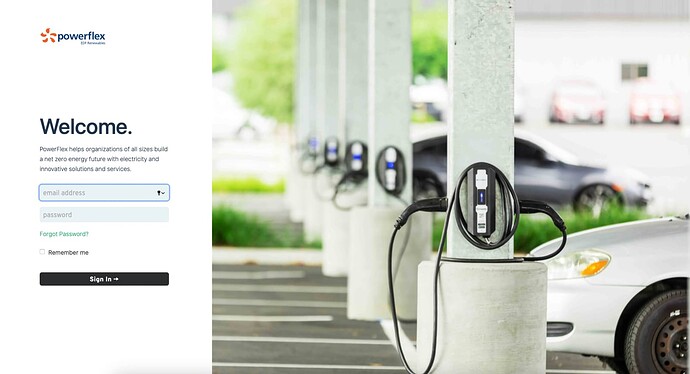 Hi Tim! Thanks for getting in touch about this, although I am not immediately clear on what your concerns are about the PowerShaper.io domain?

Part of the reason that those fields are commonly redacted is that it is the default setting for the registration of domains with the service we use, rather than an intentional attempt at obscuring anything.

The .io domain is commonly used by tech projects and software-as-a-service (SAAS) products, and it is in this vein that we have used it for the PowerShaper service. We are not looking to hide anything and our contact information and organisational information are clearly available on the site.

I hope this clears some information up about this! Feel free to send me a message or drop me an email if you have any more specific questions or issues.

It was not me that was concerned about the .io domain but someone on another forum. I can pass on your reply. Neither did I post the Eon web site, which I had never encountered before it was brought to my attention by @Peter_Bates. I am pleased to say that I have never had any dealings with Eon.

I am happy that Carbon Coop and its projects are bona fide. In fact I am something of an enthusiast.

No problem! In looking into this I noticed that Octopus also have a very redacted registry entry, and I think there is a valid critique of that overall, but I think it is being led by the default settings from web hosts like AWS.

And I think the confusion with the powerflex.io link was just a typo in your original post

Someone on another forum pointed out that the PowerFlex web address is an .io one. Being suspicious and suspecting phishing he checked the .io register for powerflex.io .

We definitely appreciate the feedback as it is useful to know what impression non-members are getting!

Oh dear. Thanks for letting me know. The original has now been corrected.

Thanks for this useful discussion. Huge excitement here just to have had our SmartMeter fitted, especially having recently signed up for the PowerShaper Flex trial. And against all expectations and neighbours’ recent experiences, the SmartMeter successfully communicates out from our rural-Leicestershire-valley village.

Meanwhile the pedant in me notices still:

Someone on another forum pointed out that the PowerFlex web address is an .io one.

Although you have corrected it in the url which you quote in the next sentence, it looks as if the word ‘PowerFlex’ in that first sentence of the original post could still do with being corrected to 'PowerShaper Flex’as well.

Quite right, Paul. I have made another correction.

In my ignorance I had thought that more or less everyone had a smart meter now, although I was aware that quite a few do not function as anticipated (as with your neighbours). However it seems that smart meters are still something of a rarity.

I have read that rather than take an off the shelf solution, Ofgem and the electric companies decided to “reinvent the wheel”. Then GCHQ got involved in encrypting the data and user authentication. We now have a camel instead of a horse and hence all the problems.

It is interesting to hear this SmartMeter background, Tim. In our case we are in a notoriously poor area for mobile communications of any sort, so as I understand it it was simply a lack of signal here which meant our neighbours’ meters couldn’t communicate. Moreover, none of the energy companies with whom we’ve previously been signed up wanted to give us a Smartmeter, by reason, I thought perhaps, of lack of signal, although they never said what the reason was. And a relative in Kensington has consistently over several years been unable to get a Smartmeter from her provider SSE, despite them regularly telling her to go to their website and apply online. When she goes to do so there are no appointments available.

Anyway, it is great to have moved into the 21st century along with you and other Smartmeter users, so I am looking forward to better-informed energy use and monitoring through this further magnificent Carbon Coop PowerShaper Flex project.

I know people who don’t want a smart meter, but haven’t come across anyone who wanted one but was refused. I was an early adopter with Ovo, and have never looked back. I have SMETS1 meters which have on the whole worked reliably, apart from two noticeable blips when there were outstanding firmware upgrades. After the most recent the PowerShaper monitor data recovered much more quickly than Ovo. I’m considering switching to Octopus who have confirmed, after a few emails and photos of the meters, that they will almost certainly be able to read my SMETS1 meters. They even suggested that they would swap in SMETS2 meters if necessary. I can’t take part in the PowerShaper Flex trial because I don’t have an EV or an immersion heater, but would if I did!

I’ve actually had a smart meter just over seven years. The first one - SMETS 1 - was installed by Ovo Energy - who offered it to me and I took up the offer. When I switch the Bulb Energy - they could not collect data from it. But as soon as I moved to Octopus Energy in November 2020 - they could pick up the data immediately with no problems and then offered to replace it with a SMETS 2 smart meter in December 2020. Again it picked up the data with no problems and even historical data. I’m based in Ely, Cambridgeshire.

Concerning communication problems in other areas the mobile phone company O2 may have a solution with their LTE-M - low power, wide area network for IoT devices. They claim to be the first company in the UK to offer the Network and already cover the eastern half of the UK. See LTE-M | IOT | Business

I’m hoping to trial some new sensor and monitoring devices in my home that will utilise LTE-M in the next few weeks. They will monitor humidity and temperature in an individual home that should collect valuable data remotely - prior to offering retrofit advice for a property. Once it’s up and running I will set-up a separate topic on the subject in this forum.

Sad to hear of Ben’s departure from Carbon Coop. Wishing him well.

Looking at my PowerShaper Flex dashboard, I can click on “View” against each of the PowerShaper ‘events’ (remote switch-off periods) in which I have participated since my immersion heater relay was installed on 24th November 2020, but when I do so they all give the message “Completed events will not appear here immediately - it typically takes two days for our system to process your electricity usage during an event.” Is this the message I should be receiving there I wonder?

I see that I was apparently involved in all events 14 to 31 except 22. I had suspected that our HEMS was having WiFi connectivity problems during part of that time however (as it has since), so I wonder if being “involved in” an event means that connectivity was good enough for me to indeed be switched off and on again, for them all, on the dates shown.

In case anyone else has similar questions, Sam Holt has kindly replied privately to say that (and I trust he will not mind me posting it here):
"To calculate flex for a given event, there are two possible data streams we use. Preferably, we use smart meter data to give an overall picture of a participant’s energy usage during an event. If that doesn’t work (which is sometimes the case), we use telemetry, i.e. recording data directly from smart devices.
In response to your questions:

And in reply I have said: “Many thanks for this, Sam. That is brilliant.
I didn’t have a smart meter until after the end of the trial in fact; it was fitted only on 8th March 2022 (this year). I’m glad it will ensure that there will be more verifiable data next time.
Thanks again”